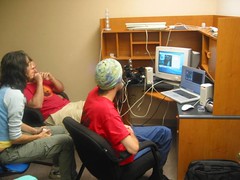 BY GREG BAKER
Street Magazine
Miami, FL
November 28, 2003
Ed Hale first showed his skill as a musician and songwriter with the Broken Spectacles and has in the new millennium reaffirmed his status as a thoughtful, progressive, top-notch musician fronting culture-blending rock outfit Transcendence. Thanks to him, some FTAA demonstrators enjoyed the use of a media center any politician would be proud to call campaign headquarters.Unbeknownst to police and media, many groups of protesters set up shop in Transcendence headquarters, a two-story building in the Design District. Phone lines were installed, cubicles erected, and laptops were ported after a local musician who knew a protester told Hale that the demonstrators needed housing space. The media liaisons for the various protest groups, whose main purpose was disseminating info to the mainstream media, had been operating out of a downtown ”convergence center,” where space was at a premium.
After seeing this pathetically bare-bones arrangement — a note on one wall listed pens as a necessity — Hale opened his doors. He met and talked with reps from some of the groups — including steelworkers, ecologists, lawyers, and publicists — who would soon be conducting secret meetings to, among other things, prepare for a Wednesday afternoon press conference at
Miami
City Hall.Hale’s biggest contribution to the preparations was probably the hammering he gave the phone company after being told it would take five days for phone lines to be installed in his building. After explaining the purpose of the phones — to create a real media center for people demonstrating — Transcendence HQ had, within a few hours, all the phone lines necessary. And a DSL to boot. (”The lady was so nice. She even gave me her cell number in case I had trouble installing the DSL,” Hale said with a touch of awe.)Their operation up-and-running, the protesters’ City Hall strategy worked. All sorts of media showed up at the event: English- and Spanish-language, print and TV, mainstream and not so. But there were no cops and no problems, even when protesters went into the City Hall building itself, demanding to see a ghost: The invisible Mayor Manny Diaz had supposedly left his office after meeting with Commissioner Angel Gonzalez. (Side note: Has anyone ever actually seen Manny Diaz?)
Transcendence just released a new CD, Sleep With You, and has been working to make it a success. ”Fourteen hour days,” Hale said, describing his recent schedule. ‘Talking to station people, sending out press kits. On Tuesday [November 18] I got an e-mail telling me that we’d [begun receiving airplay] on 100 stations. But I was so absorbed by `The Matrix’ — people putting their lives on the line for what they believe in, people taking action, the way the [demonstrators] worked together, like one person working the phones while another goes to buy food for everyone else, while someone else takes the phone — that I hardly had time to notice.”
‘Spending time with these people and listening to them really opened my eyes. The AFL-CIO guys were so cool, and they were thanking me for letting them use the space, and I’m saying, `No, no, thanks for coming and talking with me.’ Long after the demonstrations, the indie media guys were still here disseminating info. The cops try to spin the media, so it becomes necessary to defend the truth.”
If all the protest groups in the Matrix combined forces — as many did here — the organization would be too much for cops, too much for cities, too much maybe even for George W. If The Matrix were real (and who’s to say it isn’t?), America could become a nation of high moral standards and beneficent behavior.Adam Hurter, a demonstrator who traveled from Massachusetts specifically to denounce the FTAA, said, “The key thing is people coming together and working co-operatively for a world not run by corporations; people who come together with a spirit of hope that we can change the corporate system and who try to build communities to replace the corporate power structure. And we were really interested in connecting with the people of Miami. “Ed Hale made the connection. In more ways than one. And The Matrix grows.”