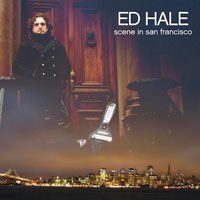 The new Ed Hale single, “Scene In San Francisco,” debuted at #33 on the Hot AC Chart this week. Hales’ previous single, “New Orleans Dreams” is still on the AC chart at #15 this week, effectively giving Ed Hale and Dying Van Gogh Records 2 songs in the Top 40.
Another acoustic-pop gem, “Scene in San Francisco” is a catchy beat-driven romantic ballad that features Hales’ traditionally heartfelt singing and poignant lyricism. But this time Hale turns his attention toward the heart and turns the heat up with a timeless and heartbreaking story of “two lovers lost in the heart of San Francisco”. The result is a gorgeous melody that stays in your head for days and a story that nearly everyone can relate to.
The single will be released on iTunes, Amazon, and other digital retailers on January 17th, 2012.
Take a listen on SoundCloud:

1. What are you currently up to?
a.       Currently up to our necks is what we’re up to! Total madness. But a very cool kind. Semi-controlled madness. Just a lot of incredible things happening right now all at the same time. It’s a thrill and a rush for sure. But it also requires extreme focus and attention, which isn’t usually the stuff of artists if you know what I mean… More than anything else I’d say we’re all very excited about the upcoming release of the new Transcendence album All Your Heroes Become Villains. It’s hitting retail and digital stores all over the world as we speak and people are loving it. The concept of the album is resonating with people at this time. One critic called it “The perfect soundtrack to a beautiful apocalypse.” That pretty much sums it up I’d say. So that’s a good thing. Right now t’s making a big splash on College Radio here in the States.
b.       Oddly enough, at the same time we’ve got this other thing happening with my last solo album Ballad On Third Avenue which was totally unexpected. The second single “New Orleans Dreams” has been climbing up the Adult Contemporary charts here in the US and spinning in 21 other countries. Including the UK of course. Right now the song is currently #10 in the US. Because of this, there’s a whole new interest in this solo album. We didn’t see this coming. So we’re literally working PR and promo on two totally different albums at once by the same artist. AND trying to book two separate tours to support these two very different albums. It’s insane.
c.        We’re doing a ton of press, which is always fun, and at the same time we’re working on the music videos for the “Villains” album. Of course we are also planning the US tour, deciding which cities to hit and which other countries to books some shows in. That’s a daunting task. But obviously well worth it once we’re on that stage. We love performing live. It’s THE rush of all rushes. If that doesn’t sound like enough, we’re also in the studio and just about halfway through recording two new “Ed Hale solo albums”. We’re still attempting to get our minds around what these new albums ARE… what their all about… We recorded about 20 songs so far and we’ve found that about a third of them sound like Adult Contemporary, a third of them sound like a more mellow singer/songwriter vibe, and another third sound more like they belong on a Transcendence album. They’re more alt-rock. It’s weird how we work like that. It confuses some people… but not us. We’re used to it.
d.       And of course there’s the mysterious The Great Mistake album that we still haven’t officially released, but it’s been sneaking around the internet for a few years. We just found the master tapes and gave them a listen and they sound incredible. Just over the top raw garage rock but catchy as hell. So now we are all involved in this heated debate as to “when should we release this new-new album?” It obviously doesn’t make sense for us to release it now. And yet it sounds so damn good we want to! Take French band Phoenix and mix it with some Strokes and Vampire Weekend… add some early seventies Rolling Stones, Velvet Underground or Wolf Mother and you get a pretty good idea of what the sound of this new new album sounds like. It’s done. Just needs to be mastered. I can’t wait for everyone to hear it. I just love it.