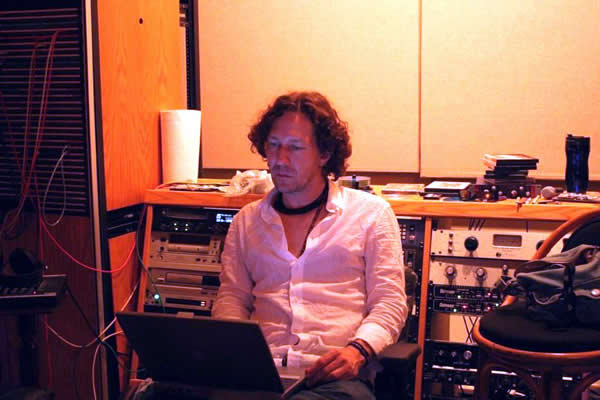 Singer, songwriter, rockstar, recording artist, writer, author, activist, thinker, anti-populist blogger, and general raconteur Ed Hale is a hard man to keep up with. Affectionately called “the Ambassador” by friends and fans, Hale was originally introduced to the world at the age of 17 as Eddie Darling upon the release of his debut album entitled EDDIE. He may be best known now as the lead singer and guitarist of the popular Brit-pop/Modern Rock group ED HALE AND THE TRANSCENDENCE; or for his latest hit singles “Scene in San Francisco” and “New Orleans Dreams” — the former blasting up Billboard’s Adult Contemporary Top 30 Chart and staying there for over three months and counting, making Hale the “Most Active Independent Artist and Song” on the chart for sixteen weeks. Both songs are from his latest solo album Ballad On Third Avenue. Hale releases albums and tours, both solo and with his band Ed Hale and The Transcendence, whose newest album, the epic rock-opera/concept album All Your Heroes Become Villains hit stores on November 15th, 2011. His entire catalog is available at music stores and retailers worldwide and everywhere music is sold online including the iTunes Music Store and over two-hundred other outlets such as Amazon.com, Rhapsody, eMusic, LastFM, iLIke, Pandora and Spotify. He is currently signed to Fieldhouse Music/BMG, Cherry Lane Music, and the Dying Van Gogh record label.
Connect on Facebook.com/edhale
Or Twitter @ed_hale
“Still finding myself obsessed with a quiet secret subtle and almost constant gnawing at my insides about the unbearable sadness of how impermanent everything is. Our lifetimes are short here. I remind myself that it is up to me to find meaning while I am here. I try to live my life to its fullest and even then I cannot shake the deep underlying knowing that they are all just moments lived and then soon forgotten. Where is the meaning in that?”
-Ed Hale, from his blog The Transcendence Diaries

Hale takes a break during recording sessions for the new Transcendence album All Your Heroes Become Villains in 2009.
Photo by Gina Rowland.

Please address all Media Requests and press correspondence to press@dyingvangogh.com

A new blog has been posted to the Transcendence Diaries
http://www.transcendencediaries.com/2013/09/superman-explains-transcendence-diaries.html via Blogger

A new blog has been posted to the Transcendence Diaries
http://www.transcendencediaries.com/2013/08/peace-mission-to-israelpalestine.html via Blogger

All Your Heroes Become Villains, Blogs

Track #10 from the 2011 Ed Hale and the Transcendence album All Your Heroes Become Villains, the anthemic “After Tomorrow” is the climax of the album, a suicide letter and soundtrack to the lead character’s journey to the beyond after death. A dirge-like heavy Brit-rock foundation punctuated by a lone echoing trumpet played by Emiliano Torres.

“Trying to pin down elusive American Ed Hale is a frustrating task. It’s as if the guy has swallowed an encyclopedia of alternative rock and the contents are flying around his musical digestive system like the balls in the National Lottery Draw!”
– Hugh Fielder, Classic Rock magazine

Preview and Pre-Order the New Ed Hale and Transcendence album All Your Heroes Become Villains on iTunes or Amazon.com Starting Today!

Watch the trailer for the new All Your Heroes Become Villains album exclusively on YouTube!

The new album, All Your Heroes Become Villains, is now available for pre-order on iTunes.
Click here for US iTunes, or UK iTunes.
Alternatively, if you wish to pre-order a physical copy, please visit http://edhaleandthetranscendence.bandcamp.com/

The new Ed Hale solo album Ballad On Third Avenue is now spinning at over 350 college radio stations across the United States and Canada and is expected to hit the CMJ Top 20 Most Added Album List next week. See the list here for the station in your town and listen in. As always call-ins from fans are very cool. For the new CD, Hale will be conducting on-air interviews with stations across the country and many stations are also holding contests for fans to win free autographed copies of the new CD or t-shirts and other memorabilia. More info can be had by tuning in to your local college, community, or university radio station for details. In today’s singles-oriented atmosphere, college radio still holds the distinct advantage over commercial radio in that they are serviced with entire albums by artists – rather than just “the newest hit single” – and never afraid to dig deep they are usually more than eager to play the more rare, less-heard, or experimental tracks from new albums. All hail college radio for staying true to this vision and offering music fans this invaluable service. The college radio campaign for Ballad On Third Avenue is being handled by The Syndicate.
The first single from the new album, “I Walk Alone,” hits commercial radio stations across the US next week. A new update with a commercial station list for every town will be posted in the next few weeks. Stay tuned.

Ed Hale – who has been hard at work on his new book Revolution in Me while awaiting the release of the band’s new CDs – will begin a regular weekly guest blog for a few months on the official Sundance Film Channel website in the coming weeks focusing on his peace delegation visit to the country of Iran and how it relates to all things GREEN: the environment, peace, war, oil, nuclear energy, and most importantly humanity. The blogs will be similar to his regular posts on his long-running Transcendence Diaries blog but will be shorter in length of course. The blog posts will feature photos, and links to videos and photo slideshows from his trip, as well as guest interviews with authors, scientists, and experts in various fields. Stay tuned for the first installment.
In the meantime, Transcendence does indeed have three new CDs releasing this year including the band’s official two new albums, The Great Mistake (EMI) and All Your Heroes Become Villains (DVG), and a new rarities and unreleased tracks album called The City of Lost Children. Stay tuned for release dates.
To best stay informed of the latest, head to Facebook and add as a friend or subscribe to this site or the band’s site either through email or RSS Feed.