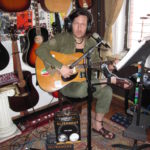 Singer/songwriter Ed Hale signed a two year product endorsement agreement with German luxury headphone manufacturer UltraSone this week guaranteeing the singer will use UltraSone headphones exclusively for his new album. Hale, who is currently in the recording studio in New York City commented Friday “Obviously UltraSone headphones sound great. Without that there’s really nothing else. But really sold me was their S-Logic Surround Sound technology. It enables listeners to listen at much lower levels than we normally do and still hear the music we are creating which translates into much less potential for hearing damage or hearing loss. This is more than important I would think.”
No details about the agreement were made public but Dying Van Gogh Records stated that the artist is in the process of signing multiple product endorsement deals including last week’s agreements with MikTekmicrophones and Dean Markley guitar strings. Hale earned his street cred back in the heyday of the jangly guitar rock of the early nineties and has never been shy about saying no to product placement or advertising no matter what the benefits. He and his band Transcendence boycotted participation in the Budweiser Battle of the Bands Concert Series after they won the competition and once made waves by refusing to appear in a guest spot on the Howard Stern show.
“I don’t see how or why that particular decision caused any waves at all. What the hell does the Howard Stern show have anything to do with what we do in Transcendence?” the singer was quoted as saying. “What we are looking for are companies whose products we actually use, or want to use, companies we admire, who are aligned with the bigger mission. UltraSone is breaking boundaries. Their headphones are incredible sounding AND they have new technology that actually respects the health of the listener. That’s innovative. Big ups to them.” Hale is currently excited about a possible agreement with the Gibson guitar company.