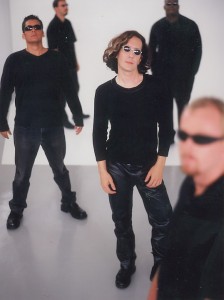 MULTIFACETED ROCKER WRITER ACTIVIST ED HALE SHARES HIS UNFILTERED INSIGHT ON LOVE, SEX, POLITICS AND OTHER CONTROVERSIAL TOPICS AS HE CELEBRATES THE TENTH ANNIVERSARY OF HIS ‘TRANSCENDENCE DIARIES’ BLOG
Ten years ago Ed Hale (www.edhale.com) was at the forefront of the blogosphere, which at that time had not yet become the phenomenon we know today. The role of blogs has become increasingly mainstream as political consultants, news services and pop culture lovers began using them as platforms to share news, views and opinions.
This month marks the tenth anniversary of Hale’s very first post to his long-running ‘Transcendence Diaries,’ a collection of the singer’s online musings and personal journals. It is where Hale has expounded upon his unfiltered thoughts over the course of the past decade discussing politics, love, sex, work, music, life, science and religion all uncensored and at times shockingly personal. The first post went live on July 12th, 2002 when Hale’s team built the website for “the Diaries” as they are called from scratch, because “there were no examples of how to do it back then, no WordPress or Tumblr,” the singer commented this week. “We were winging it. It felt like the Wild West. I’d email the entries to the guys every night and they’d figure out a way to get them online by morning.”
The Transcendence Diaries have gone through a variety of redesigns through the years and now host over three-thousand entries and nearly ten-thousand pages. “You never know who’s reading them,” Transcendence drummer Ricardo Mazzi stated. “Ed’s smart. And funny. People like reading his crazy ideas.”
Those who have followed Hale’s extraordinary career over the past decade know that he is not just about penning insightful online offerings but is fresh off the success of his recent hit single “Scene in San Francisco”— which reached the Top 15 on the FMQB AC40 Chart and Billboard’s Top 30. The modern rocker turned Adult Contemporarystar is currently working on a new solo album due out in early fall; and his band, indie-rock stalwarts Ed Hale and the Transcendence, are releasing yet another new album, entitled The Great Mistake, less than nine months after last year’s rock epic All Your Heroes Become Villains.
2012 also celebrates another milestone for Hale and team: the ten year anniversary of the debut of the band itself and their first album, Rise and Shine. It was released in January 2002!
For more information visit www.transcendencediaries.com and www.edhale.com
Contact: Andrew Purcell, LUCK Media & Marketing, Inc. (818) 232-4175