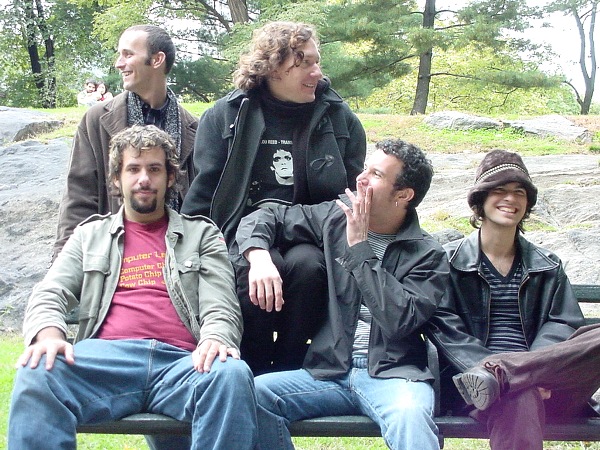 Original Article by Lee Zimmerman
Originally published in New Times Magazine: November 4, 2004
Indian summer can be lovely in New York City, but for Ed Hale there was little time to savor the sights. He and his band Transcendence were in town for the annual CMJ Music Marathon. And that found Hale talking up more record industry players than a Jehovah’s Witness who’s been handed a quota.
“New York was amazing for us,” he reports a few days after the show, during a brief respite at the Manhattan apartment where he now resides when he’s not in Miami.
Indeed, it was a busy weekend. On Friday, October 15, Transcendence performed on a seven-band bill at the Acme Underground, playing just before headliner (and comparatively unknown) New Jersey hardcore band Start the End. “We spent most of our time rehearsing … then we played the show and had a bunch of labels there, and we spent another day doing photo shoots and having meetings,” Hale recalls, citing Atlantic, Epic, and Geffen among the companies that came calling.
This routine isn’t new for Hale. Since founding Transcendence in 1999, the band’s chief singer and songwriter has relentlessly multi-tasked on its behalf, gigging by night alongside rotating drummers Ricky Mazzi and Bill Sommer, guitarist Fernando Perdomo, bassist Roger Houdaille, and new pianist Allan Gabay, while taking care of business by day. He also runs the record label TMG that has released Transcendence’s three albums — 2002’s Rise And Shine, last year’s Sleep With You, and the brand new Nothing Is Cohesive. His persistence has resulted in a substantial amount of national attention without any major label backing.
“We decided to start our own label and stop trying to depend on getting a record deal … since we didn’t know if that was ever going to really happen,” explains Hale. “We have indie radio promoters around the country who picked us up after the Sleep With You album charted at number 23 on Billboard’s U.S. Alternative Specialty Show chart. They started calling us.
“Same thing with publicists. They would call up and say, öHey what’s up with this band?’ and then I would pretend to be some big time record company guy on the other end of the phone and cut deals with them on the band’s behalf. They never knew they were speaking to a member of the group.”
“Ed’s a smart guy,” says Sommer. “He treats the business side of the band as a business, which most bands fail to do. He’s on the phone all the time, making contacts, and putting our music into the hands of people that need to hear it.”
Those that have heard Transcendence have taken notice. Two years ago, Rise And Shine helped them win “Best Unsigned Artist of 2002″ in the notable South Florida music competition Big Time Talent Show.

Transcendence, from left: Bill Sommer, Allan Gabay, Roger Houdaille, Ed Hale, and Fernando Perdomo
But it was Sleep With You that proved to be the Transcendence album that caught the ears of the rest of the country. “Yes, it’s deluded and occluded, but it still rocks like nothing else out there,” noted the review. The lead single from the album, “Superhero Girl,” received airplay on more than 400 college radio stations, and was featured on the sampler CD in the February issue of CMJ New Music Monthly magazine. The accolades led to a national distribution deal and management contract with Xtreme Music Group, an entertainment company in Indianapolis, Indiana. It is lining up a European tour for Transcendence tentatively scheduled to begin next spring.
Transcendence has long boasted a strong fan base in South Florida, even before its first album was released. “Our CD release party for the Rise And Shine album had over 400 people there,” says Hale. Still, he admits that South Florida’s relatively small rock market frustrates the band.
“The fact that Transcendence is more popular in places like Gainesville and Long Island than their hometown Miami is personally not too surprising,” says Houdaille. “With South Florida’s radio not interested in spinning our single öSuperhero Girl’ and a local music scene which has yet to find audiences, I think the smartest way to go about things is what we are doing … focusing on the rest of the world.”
“Miami has an amazing group of world-class rock talent … but unless a band gets the hell out of there and plays for audiences in the rest of the country, it just isn’t going to happen,” adds Hale. “This was one of the first things the major labels started telling us when they would meet with us. They would tell us that, number one, we weren’t going to find a big enough audience in Miami making the kind of music we wanted to make, and two, that Miami is too far south to be a good touring base … that we needed to get our music out nationally.”
Hale also admits that Transcendence’s musical reach may have thwarted their attempts to connect with a major label. Sleep With You had its quirky Brit rock swagger, revealing a taste for glam-era David Bowie and T. Rex. Then there’s the mind-boggling mix summed up by the title of the new opus, Nothing Is Cohesive, a stunning collision of anthems that cull from Pink Floyd and Supertramp to U2, Coldplay, and Radiohead.
“In Transcendence, you have got a band of five very hyperactive, entirely obsessive, relatively insane guys with a severe case of ADD and an extreme passion for music all running around trying to make sense of everything they are listening to and wanting to create their own personal artistic statements. And so the chances of that translating into any two albums sounding remotely similar is going to be pretty slim,” says Hale.
Undeterred, Transcendence recently hunkered down at Miami’s famed Criteria Studios, laying down tracks for an album targeted for release next year. While Hale claims it will have more focus and even commercial appeal than their previous work, he insists the group will remain true to their muse. Or, as Perdomo puts it, “Look good and sound great.”