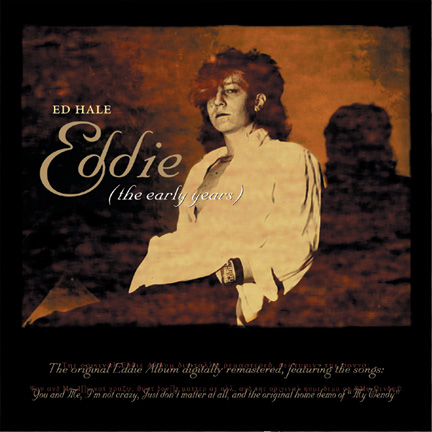 The first ED HALE album was released on the independent record label Alarming Talent Records when Hale, who went by the name Eddie Darling then, was 17 years old and still in high school. The album was simply titled EDDIE. Hale was discovered by pop-music historian and critic Murray Silverâ€”author of the Great Balls of Fire Jerry Lee Lewis Story book and movie who had started a small record label in the burgeoning Atlanta music scene. Though it is clear now, looking back there was no way one could predict the many stylistic roads Hale would travel down throughout his career as a recording artist. Described as a musical Picasso he is known for creating entirely different landscapes, little worlds each unique and special, with each new album he releases. More like movies than music albums. Some fans find it difficult to keep up with Haleâ€™s voracious appetite for exploring different musical styles.
It may be due to the fact that Hale was still in his teens, new to the business, and under the guidance of heavy-handed executives and the pressures of the business, but the Eddie album did not foreshadow the style-surfing of Haleâ€™s future work with jangly-pop college rock darlings BROKEN SPECTACLES, nor his later world-music forays with his current group TRANSCENDENCE. It did not indicate Hale would over the course of three years steer from middle-eastern and Brasilian music on Rise and Shine, to heavy commercial alt-rock on Sleep With You, to garage-pop and indie-rock on Nothing is Cohesive. The Eddie Album is a relatively consistent work. The influences are easy to spot, the Beatles, T. Rex, Dylan, though it is also slightly marred by when it was recorded. The music of the eighties had a very distinct sound, and this album was no exception.
For those searching for the quintessential starting point of the Ed Hale sound and story, the EDDIE album is it. It is moody, dreamy, bouncy, romantic 80â€™s euro-pop. His voice is soft and whispery, neither matured nor fully developed, he was often compared to a young Marc Bolan or David Bowie. He comes off like an innocent but daring young Casanova, ambitious and romantic, and a touch too cheeky. But the album is filled with catchy melodies that fans would soon come to expect. Raw passion, plenty of lust, and teenage emotion and angst.
Lush, orchestral production, and punchy eighties beats are the focus of this ten song disc. Standout tracks on the newly re-mastered release include She Says Youâ€™re the One, and You and Me. There is a yearning in both songs which is touching and poignant and similar to many songs Hale would write and record on future albums. Then there are the hints of what would soon be a trademark song style that he would explore deeper in Broken Spectacles â€” the anthemic and operatic long-song form in the likes of Iâ€™m Not Crazy, in which he ominously pleads â€œIâ€™m not crazy/but Iâ€™m on my way.â€ It features an intriguing orchestral break in the middle of the song. Very Bowie, Elton John. Depending on whom you ask. Just Donâ€™t Matter At All finds the artist waxing philosophic on growing up with a characteristic Beatlesque sing-a-long multi-voiced outro.
There is the misogynist dance-club hit Since I lost You which was all the rage in the dance clubs of Atlanta in the summer of â€™89 which Hale still claims to prefer to forget, and the ego-infested rocker Obsession with Hale chanting â€œIâ€™m the solution to all this talk about revolutionâ€ in the chorus with hubris typical of an American teenager, a super-hero confidence theme that dominated the lyrics of his early records; until the middle period of his Broken Spectacles work when his songs became more introspective and pensive, taking on an a nearly nihilistic and self-deprecating nature.
Ed Haleâ€™s Eddie album is a classic for collectors of his work, but not a classic album. One can clearly hear the singer still developing and searching for a sound of his own. And the album as a whole is a much simpler transparent work than what we are used to by this point. But there are however four must-haves on the album: the aforementioned You and me, She says youâ€™re the one, Iâ€™m not crazy, and Just donâ€™t matter at all. These songs are classic Ed Hale and say much about what was to come. The purity, passion, and raw romanticism of each still bring goosebumps and a skip of the heart.
1. You And Me
2. Obsession
3. Just donâ€™t matter at all
4. She says youâ€™re the one
5. Since I lost you
6. Irrelevant babbling
7. Iâ€™m not crazy
8. And itâ€™s you
9. My Wendy
10. I found you
11. My Wendy (original demo)
ALBUM CREDITS
ORIGINAL RECORD LABEL: Alarming Talent Records
ORIGINAL Release Date: October 20th, 1989
RECORDED: August 1988 â€“ October 1988
STUDIO: Important recording studios, Ft. Meyers, FL
PRODUCED BY: Murray Silver, Ed Hale, and John McLane
ENGINEERED BY: John McLane
DIGITALLY REMASTERED BY: Eddie Mashal at Alle Audio; Hollywood, FL
MUSICIANS: Ed Hale – vocals, guitars, keyboards. John McLane – guitar, bass, keyboards, sax, and background vocals, Max Mazzone – Drums. Diane Kerri – background vocals.
All songs music and lyrics written by Ed Hale